* Relaxation & Confidence for Kids: Classes/workshops in various schools and libraries throughout Ireland - including festivals such as Body & Soul and Electric Picnic - to kids from as young as 3, and even some parents!
* Relaxation & Mindfulness for Adults: Workshops in various libraries - teaching adults breathing techniques, self-massage, calming the mind and getting in touch with their emotions and inner-calmness.
* Exam Stress-less for Teens: Workshops in various libraries & youth groups - teaching students to remain calm to receive the best from their exams and study time.
* Creating & Facilitating workshops in Youth Groups and schools for 10-12 year olds in Confidence, Positive Mental Health, Bullying and Cyber-bullying 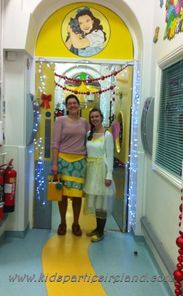 Sarah is also an artist and spends her spare time painting, working with various textiles especially wool and silk.  She felts, crochets and makes silk scarves.  She brings her enthusiasm and love of creating and crafting to her children's art classes and workshops, encouraging them to discover the artist within themselves and especially teaching that there is no "right or wrong" when it comes to art!